World Tourism Day is globally celebrated on 27 September every year. Started by UNWTO General Assembly, Spain in 1979, the objective was to raise awareness among the international community about the importance of tourism in its social, cultural, political & economic worth.

This year, World Tourism Day will emphasize on the importance of community development which will focus on the ability of tourism to empower people & provide them with skills to achieve change in their local communities. UNWTO Secretary-General, Taleb Rifai, says “Tourism can only prosper if it engages the local population by contributing to social values such as participation, education and enhanced local governance.”

He further adds, “Each time we travel, use local transport at a destination or buy products from a local market, we are contributing to a long value chain that creates jobs, provides livelihoods, empowers local communities, and ultimately brings in new opportunities for a better future”

The official World Tourism Day celebrations are being held in Guadalajara, Mexico where Ministers, development experts & key tourism representatives will gather to address the importance of a community based tourism approach.

Community & tourism are interlocked as community based tourism allows the travelers to discover more about the local culture, rituals and cuisine. Since tourism helps in providing employment to the local residents, increases taxation and promotes the development of agriculture, any kind of community based tourism will help build a new perspective for eliminating poverty, encouraging the rural population and promoting great understanding of nature, local society & culture.

Jim Edwards, a British tourism entrepreneur introduced jungle tourism in Nepal. He started Tiger Top Jungle Lodge inside the jungle in 1964. In 1973, the jungle was developed as Royal Chitwan National Parkas. The only way to reach there is on elephant back as no one exists in the circumference of 15 kilometers, except wild animals. People residing near the lodge belong to Tharu community. These poor & illiterate people work hard for survival. The jungle lodge changed their life by providing them employment. They trained them on hospitality and taught them tourism. Jim Edwards helped them open a school, provided medical facility and a lot of job opportunities. Now the lodge’s popularity has increased due to the elephant riding jungle safari. Hence, tourism has helped in reducing the poverty and providing basic amenities to the needy. (Source: unwtoganeshthapa.blogspot.in)

Kakheti, Georgian, two years ago, had a poor infrastructure which led to the region not being able to attract enough visitors. With financial support from the World Bank, the Georgian government started the Regional Development Project in 2012 with the aim to support tourism. Their main focus was to improve the infrastructure and restore cultural heritage in order to attract travellers to the region. Kakheti has now become one of the most popular tourist destinations which used to be barren a few years ago. Tourists get attracted to Georgia’s cultural heritage & vineyards, which is the first thing you witness upon arrival. (Source: riruisfree.wordpress)

Hotels have benefited a lot as the point of sales in the Kakheti region has increased by 14%, number of hotel beds has increased by 56% and about 3,500 new job opportunities have been created. (Source: World Bank Data). 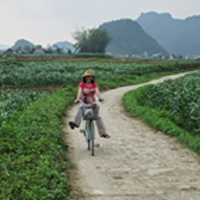 Nam Dam, a village in the mountainous area of Ha Giang province, Vietnam didn’t have many tourists until 2013 when a big change happened. A community based tourism project was developed by international & domestic non-profit organizations which helped the community build infrastructure, enhance hospitality and now Nam Dam has turned into an attractive destination for travellers. More and more tourists are coming to stay in the home-stays, relish local cuisine and enjoy the local activities held by the villagers. Tourists enjoy beautiful sightseeing, trekking, cycling and other services offered by the villagers, such as, traditional music show, handmade hemp products & local specialties. Not only has tourism brought source of income for villagers but has also encouraged the villagers to take pride in their cultural and natural resources. Seeing the influx of tourists, government has improved the roads, electricity and water supply in the village. Those who provide tourism services, contribute a certain amount of their profit into the community development fund which is used for community’s purpose. (Source: kimphamvn.blogspot)

Such is the effect of community on tourism. Since, tourism is a trillion-dollar industry with one billion tourists across borders & 5-6 billion domestic travelers, it has the potential to stabilize a lot of global uncertainties that we witness these days. It generates socio-economic opportunities that help reduce the gap between the rich and the poor. By bringing together tourism and community building, we can to a great extent provide wonderful opportunities to the needy. Hotels can promote the community building by highlighting the cuisine, music, culture or heritage.

There is no better way to learn about a new culture but to experience it firsthand. You can arrange for a cultural show at your hotel for your guests and make them learn about the culture & heritage of your local community. This way you will be able to up your sales and also promote the cause of community development this World Tourism Day.

Alternatively, you can pledge to

– Involve local artisans to sell their ware at the hotel

– Hire few local resources to work in your hotel

– Promote the cuisine, art forms & heritage of your local community

– Contribute a portion of your revenue to community development

Start a new revolution this World Tourism Day. Hotelogix takes pleasure in wishing its clients all around the world a Happy Tourism Day.